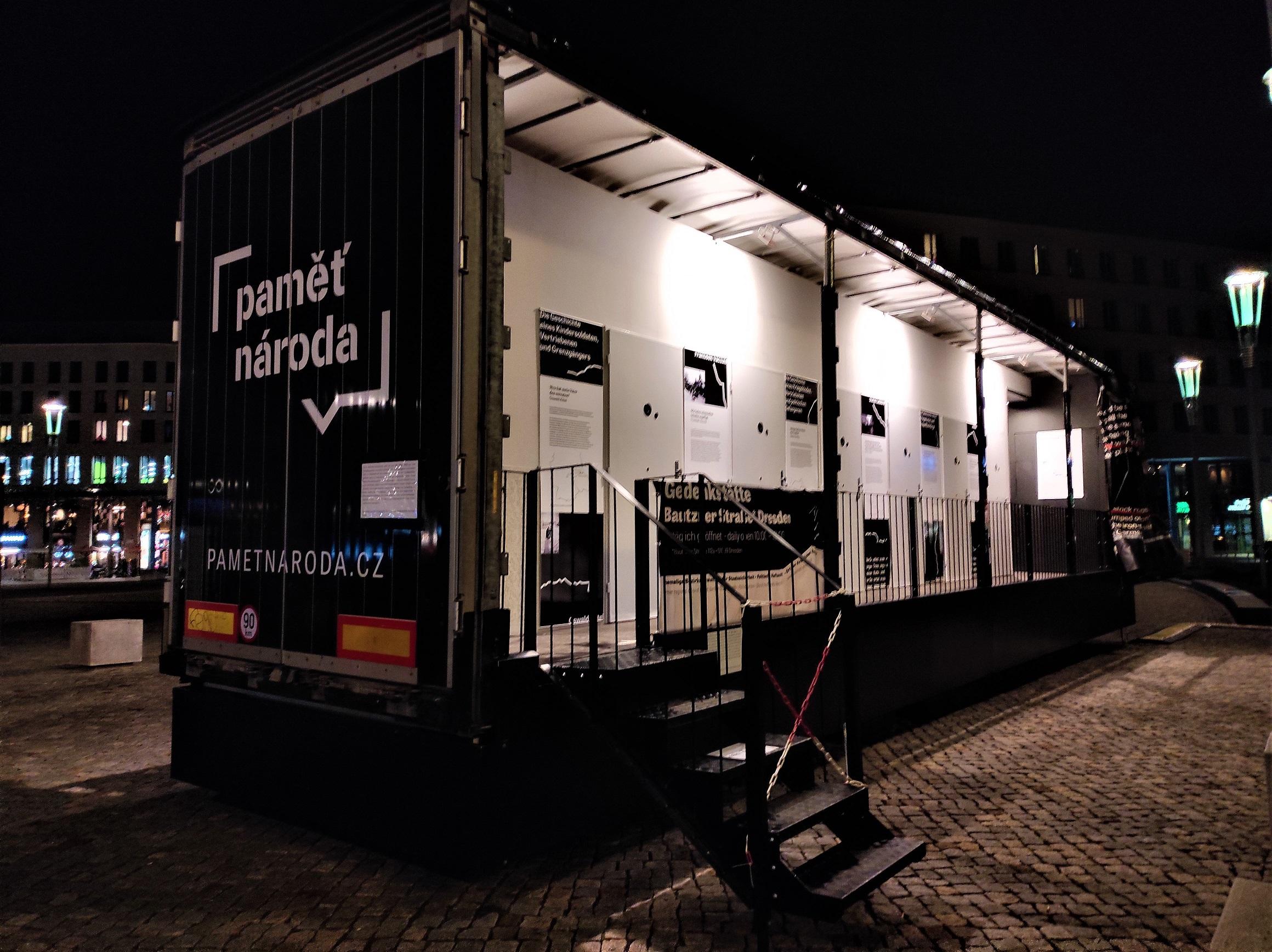 The international travelling exhibition, realised by the Post Bellum association from Prague in cooperation with local partners, travelled through five European countries and stopped in Dresden as the only stop in Germany. Twelve contemporary witnesses from Poland, the Czech Republic, Italy, Germany and Slovakia told of the suffering of expulsion from their homeland. A lorry drove the stories from country to country in the form of texts and videos on a converted trailer.

The last witnesses to one of the largest waves of migration in Europe were children at the time; today they are of advanced age. Many of them are only today, after many years of silence, telling of their experiences. "Together with international partners, we have documented dozens of escape stories of Germans, Poles, Italians, Hungarians and Ukrainians. On the wheels of our truck, contemporary witnesses return in their memories to the countries where they were born. Not personally, but through their voice and their face and through their story," says Jan Blažek, curator of the exhibition. "Witnesses tell of the hardships they faced when they left and how they were received in their new home. But the exhibition also tells of an enduring relationship with home."

In May 1945, the Second World War ended in Europe. However, the human suffering continued. Europe lay in ruins, the borders of the states were redrawn. Not only in the war itself, but also in the political realities of the post-war period, millions of people were forced to leave their places of birth. Whether they found a new home only a few kilometres away or in a foreign country, whether they were separated from their birthplaces by the "Iron Curtain" or not - they had to rebuild their existence. In doing so, they helped shape the Europe we live in today.

The exhibition was developed by Post Bellum (Prague) in cooperation with Documenta (Zagreb), Gedenkstätte Bautzner Straße (Dresden), Historisches Zentrum Ośrodek Pamięć i Przyszłość (Wroclaw) and Post Bellum (Bratislava). The project is co-financed by the European Union under the Europe for Citizens programme.

The interviews are also online on the portal: https://www.memoryofnations.eu. Memory of Nations is one of the most comprehensive collections of testimonies in Europe. The database includes testimonies of 20th century events that survived the two totalitarian regimes - National Socialism and Communism.

On 25 February, the Bautzner Straße Memorial opened the open-air exhibition on Postplatz. Speakers were: the First Mayor of the state capital Detlef Sittel, the former Lord Mayor of the city Dr. Herbert Wagner, the curator Jan Blažek and the contemporary witness Günter Klemm.

>>> Recording of the exhibition opening in the media library

>>> videos with subtitles in all participatijng languages <<<